You are here: Home / Blog

How do we celebrate for a birthday of a congregation?  And a special birthday at that?  We are taking time this month to honor 125 years of ministry and service as First Evangelical Lutheran Church in Wilber, NE.

125 Years!  Way back in December of 1888, the people here in Wilber looked to start a Lutheran church, and on January 24th, 1889 they officially became a congregation with a constitution and a pastor and a building and … oh wait… they didn’t have a building yet.  But they were still a congregation.  They didn’t have a building yet.  The constitution was adopted and officers were elected. The First Evangelical Lutheran Church of Wilber became a part of the General Synod of the Evangelical Lutheran Church in the United States.  There were 11 people in this congregation.  And they were meeting in the High School and in the Baptist church building.  But they were a congregation!

How do we celebrate for a birthday of a congregation?  It is helpful to remember what a congregation is – a gathering, or congregating, of people.  And people gather when there is a reason to gather.  What is the reason for us to gather together?  Jesus.

But still the question remains – how do we celebrate 125 years of doing this?  I believe the best way to honor these years is to recognize and praise the work that has been done and then look to the future to the work that we have before us.

Jesus told the first Christian congregation what it meant and what the work is almost 2000 years ago when he turned to the people who were congregated around him and said to them, “If any want to become my followers, let them deny themselves and take up their cross and follow me.  For those who want to save their life will lose it, and those who lose their life for my sake will find it.  For what will it profit them if they gain the whole world but forfeit their life? Or what will they give in return for their life?” (Matt. 16:24-26 NRSV)

Jesus whole message and ministry was about putting yourself second and putting other people first.  He showed that in the words that he spoke.  He demonstrated that in the life that he lived and the death by which he died.  God the Father showed approval for Jesus’ work when he raised Jesus from the dead!  Jesus gave his very life away, and that is when he found it!  To truly follow Jesus, it means to give of ourselves so that other people may live.

So this celebration is about honoring our past accomplishments and looking toward the future work that we have to do.  There is much that we already do that we might not even be aware of.  It is this that makes us First Evangelical Lutheran Church of Wilber, NE.

What is God up to in our Church?

“Actions speak louder than words” and we seek to have both glorify the God we serve.

As a family of Christian believers, we commit ourselves to our mission of pointing others to God by serving our community and to growing as disciples of Jesus. 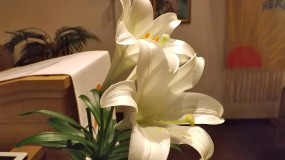